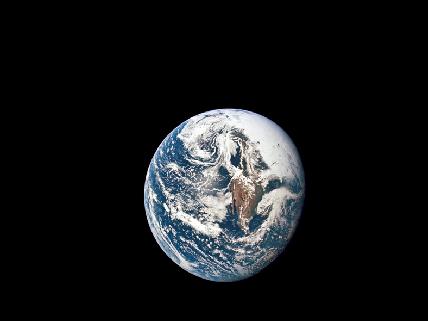 AS10-34-5013 (18 May 1969) --- A view of the Earth from 36,000 nautical miles away as photographed from the Apollo 10 spacecraft during its trans-lunar journey toward the Moon. While the Yucatan Peninsula is obscured by clouds, nearly all of Mexico north of the Isthmus of Tehuantepec can be clearly delineated. The Gulf of California and Baja California and the San Joaquin Valley can be easily identified. Also, the delta of the Rio Grande River and the Texas coast are visible. Note the color differences (greens - east, browns - west) along the 100 degrees meridian. The crew members on Apollo 10 are astronauts Thomas P. Stafford, commander; John W. Young, command module pilot; and Eugene E. Cernan, lunar module pilot. Astronaut Young remained in lunar orbit, in the Command and Service Modules (CSM) "Charlie Brown", while astronauts Stafford and Cernan descended to within nine miles of the lunar surface, in the Lunar Module (LM) "Snoopy".